Skip to content
Home / Stories / A Radical Faith: What I’ve Learned from St. Clare about being Franciscan 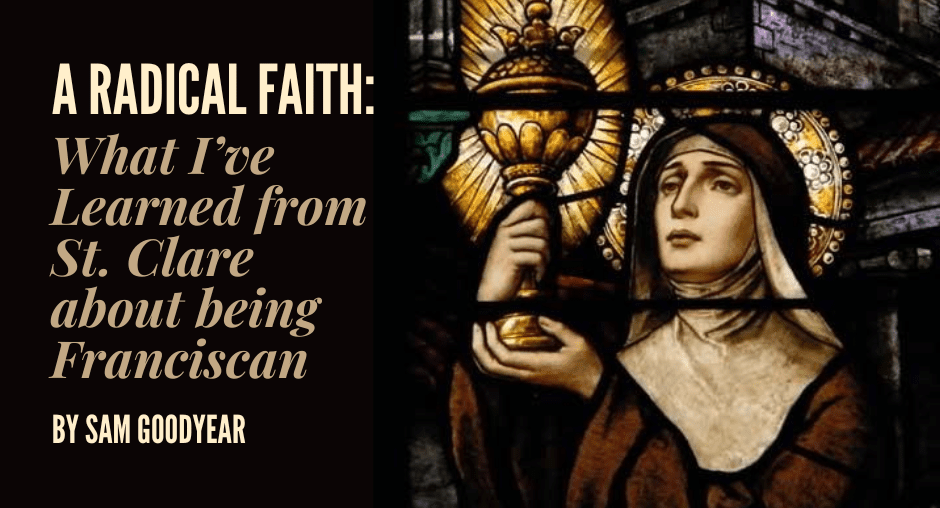 Editor’s Note: Our new class of DC Service Corps volunteers will each be reflecting on a way that they resonate with Franciscan Mission Service’s mission and spirituality. Sam Goodyear shares the radical story of St. Clare of Assisi and reflects on what it truly means to be a Catholic follower of Christ.

Since moving to D.C and beginning my year of service, I have been introduced to Franciscan spirituality. To paint a picture of how this Franciscan way has impacted me so far, I’d like to share a bit about myself prior.

I’ve never particularly liked rules, and I’ve never struggled to challenge the ones I disagreed with (for better or for worse.) I studied sociology in college because I’ve spent my life questioning the dynamics and norms that regulate groups of people, including religion. I grew up surrounded by the Catholic faith, and while I gained much purpose and goodness from this identity for many years, as I became older I started to perceive the Catholic faith as one that was based in many rules and rituals, such as the teaching to go to weekly Mass, engaging in the sacraments, and studying the Bible. While I had a respect for these traditions, I wouldn’t be myself if I didn’t question them. Was this what being Catholic, or even Christian, was all about? Reading Scripture, reciting it word by word, and obeying everything that we are taught? And, what happens when that clashes with a world we know can be filled with more love and justice for everyone, one that I truly believe is possible?

Since answering the call to serve with Franciscan Mission Service, I’ve been able to see the Catholic faith in an entirely new way, through the lens of Franciscans, in one that makes my defiant and socially “radical” self feel not only understood, but now more morally grounded in love. I’ve learned several stories, including that of St. Clare, of whom the charism of Catholicism that make up what is called being Franciscan is partially based upon.

Clare, the oldest of three in her family, had a strong sense of purpose beyond herself from a young age, paying attention and empathizing with those who were made poor in the world. She lived in a time when women’s opinions were not valued, and she had standards of how she should behave imposed on her. So when, at 17 years of age, she rejected marriage expectations and ran away in the middle of the night, it did not go unnoticed. Committed to God fully, she sought out St. Francis and the brothers to engage in their devout life, cut her hair as an act of consecration, and even clung to an altar as her uncle attempted to drag her out of a
chapel in her new life.

After hearing Clare’s story, I was compelled to question the version of Catholicism that I had constructed in my mind. This woman did not sound like someone I expected to be honored or widely recognized as a follower of Christ: she was bold, loud, and despite the efforts of authority figures, she refused to give up on the call she felt in how to live her life. Yet, this same woman is one of the two most important saints in the Franciscan order—how could this be?

Through Clare’s acts of defiance for the greater good, she managed to get the bishop’s blessing to not marry, and with the help of St. Francis, went on to found a new way of life. Clare ran a monastery until death, remaining incredibly devoted to goodness and spirituality throughout the entire span of her life. She inspired many and accomplished incredible—and what could be considered radical—things.

“Radical.” This is a word I love, as it typically refers to behavior that differs from what one would commonly expect. It is a word for me that inspires a willingness to break boundaries and go beyond perceived limitations to create new and, hopefully, better ways of living for all people, especially those who are most marginalized.

Since joining with Franciscan Mission Service, I have heard this word “radical” a lot more, but in another way, too. “Roots.” Franciscans use this word to describe how they strive to live, and how they do in actuality live, from what I continue to witness, with the intent of being connected to the roots of the Catholic faith and core principles of goodness: Jesus’ teachings. Jesus was quite radical in this way, too, teaching us that, if nothing else, to love, be kind to, and respect everyone is the utmost priority, regardless of what rules would be broken or people would become angered in doing this.

It seems that my perception of what it means to be a follower of Christ is changing the more I learn about what it means to be Franciscan, and I’m beginning to understand what that looks like in the world we live in today. Sometimes, this faith can be lived out through a bold and grandiose gesture, like Clare cutting off her hair and clinging to the altar as her uncle tried to drag her back to her duties at home, refusing patriarchal order—a sense of drama that I admittedly find a bit exciting. And sometimes it can be lived out through, yes, actually pulling out a few bills from your pocket on your walk home from work when you see someone sitting on the street corner asking for help buying a meal. How simple these acts can be, yet how spiritual and powerful they are. And yes, how radical—in a way that recognizes how incredibly socially defiant of an act this is, and also in a way that refers to the roots of Jesus’ teachings about love—these acts are.

What I am learning about Franciscan spirituality is challenging me to be a better person every day, in every way. I have only been here for three months now, but I think these teachings and these changes in myself can remain in my life throughout time. And I hope they do.

Reflection Question: What radical acts of faith and love can you start incorporating into your daily life? Sam Goodyear serves a Protection Counselor for the UN Refugee Agency (UNHCR). She is originally from New Jersey and graduated from Loyola Marymount University in Los Angeles with a degree in sociology and international relations. Sam is passionate about advocacy and activism regarding human rights, especially regarding marginalized communities, and was drawn to Franciscan Mission Service's similar values. In her free time, she enjoys doing outdoor activities, traveling, relaxing at local coffee shops, experiencing new art, and meeting new people.