Skip to content
Home / Stories / Faith Call Us to be Neighbors: “Hospes,” the True Root of Hospitality

Faith Call Us to be Neighbors: “Hospes,” the True Root of Hospitality 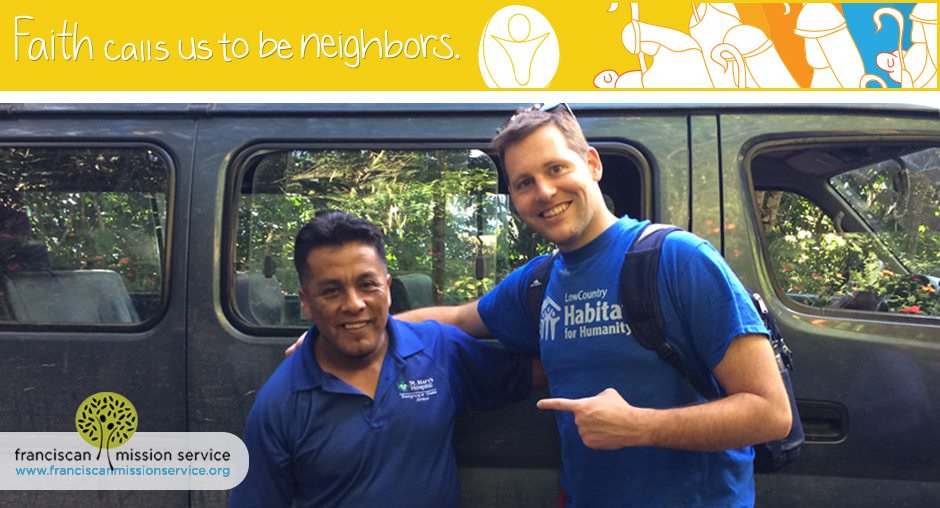 Editor’s note: Patrick McKenzie is the Director of Campus Ministry at Neumann University, a Franciscan school in Aston, PA. As a guest blogger for FMS’ 2017 Advent blog series, Patrick shares a “shining moment of true hospitality” and reflects on the true meaning of the word.

“Welcome one another, then, as Christ welcomed you, for the glory of God.” (Romans 15:7)

I am from Philadelphia. My office is decorated like that of a child’s bedroom, complete with Philadelphia sports memorabilia. I don’t say “wudder” and I don’t eat my cheesesteaks at the tourist traps in South Philly, but from time to time while walking around the city, I do fall into that stereotypical Philadelphia persona: eyes focused, ear-buds in, fast pace. Why is that? Is it in our DNA? Maybe it has some to do with the Schukyll River water.

Philly doesn’t have the reputation of being hospitable, which is ironic, as we are the City of Brotherly Love and Sisterly Affection. When you hear the word “hospitality,” you no doubt think about the South. Why is that? What makes us, in the Northeast, so different from the rest of the country? Why are we in such a hurry all the time? Why can’t we be more present? More attentive? More hospitable? We may have had our weak moments (i.e. from 1971-2003 when Veterans Stadium was open and equipped with a holding cell in the basement for the overly excited fan), but if you look closer, you can find some shining moments of true hospitality.

A few weeks back, CBS Sunday Morning’s Nancy Giles featured a piece on Philadelphia Chef Michael Solomonov called “A Place at the Table.” In the story, she described how Solomonov used his talents and influence to open a restaurant that donates 100% of its proceeds to Broad Street Ministry, a community outreach program for the vulnerable of Philadelphia. In the feature, Giles also interviews BSM’s executive director, Mike Dahl who described the mission as “Radical Hospitality, in this space, everyone is welcome, just the way they are.” Dahl goes on to further explain their program:

“Seven times a week we open our doors to the most vulnerable populations in Philadelphia and we welcome them in and provide them with a warm and nutritious meal. And it’s served at the table with linen and china, by volunteers who treat the guests just like you want to be treated: with dignity, respect, and with care.”

Dignity. Respect. Care. Ideals we should strive for on a daily basis. And yet, they are referred to as “radical hospitality.”

As a product of Jesuit education, my default setting is to examine the derivation of words in order to better understand their context. In our vocabulary, hospitality is mainly used to describe the manner in which you receive a guest, but the word “hospitality” comes from the Latin word “hospes” meaning host, guest, and stranger.

Host. Guest. Stranger. Our understanding of the word is usually from the perspective of the giver, yet the true root of the word encompasses, not only the act of receiving a person, but also of being received. How appropriate it is then that we reflect on this idea of hospitality during this beautiful season of Advent. As we await the coming of the Lord, we must remember this true understanding of hospitality.

We need to make it the norm in our lives, treating each person we meet with dignity, respect, and care. We need to receive Christ and his message of peace and charity, but we must also allow ourselves to be open and vulnerable to be received by the light of Christ.

Reflection question: In what ways can you start receiving a stranger as a guest?

Posted On: December 11, 2017/Archive, Care for Creation, Other Topics