Skip to content
Home / Stories / The Ways Between Bethlehems 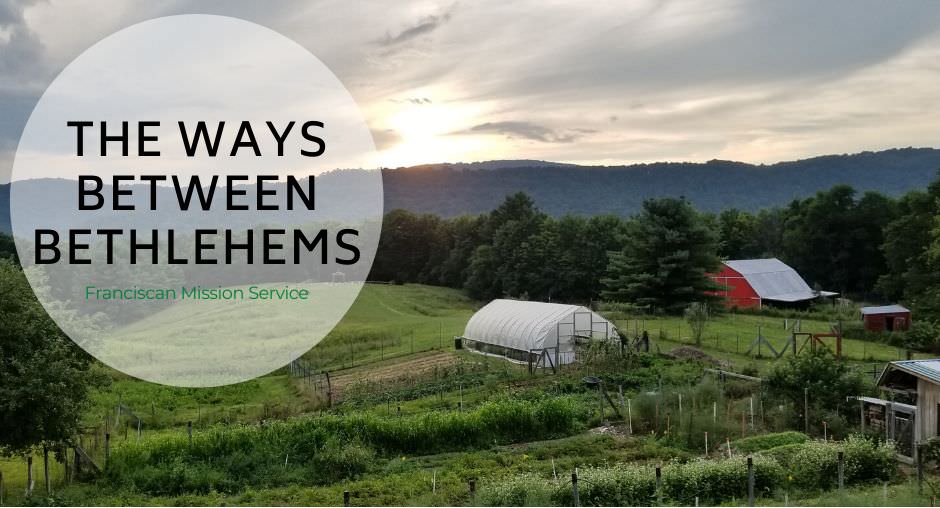 Editor’s note: Megan Hamilton, an FMS missioner serving in Kingston, Jamaica reflects on two Bethlehem’s: the first being the one that blossomed her love for catholic servant leadership, and the other being her new ministry site in country with FMS.

My second day in Kingston Jamaica I am at Bethlehem Home, an orphanage for kids with severe disabilities – often cerebral palsy. To make eye contact with a little dude, I have to bend way down and look through the white enamel iron bars of the crib. I catch his eye and he peeks back at me with big brown eyes. Hmm…what to do now? My buddy Jean yells from two cribs down. “He likes his back scratched!” Bingo! My wee friend is full on ecstatic, arching his neck, waving his knotted hands on skinny arms, smiling with electric joy. This is the second place named Bethlehem I have visited in the last few years. The first Bethlehem got me here, to my happy place with my new friend.

That first Bethlehem is Bethlehem Farms, a Catholic retreat house, intentional living community, and sustainable living center ringed by stunningly beautiful Appalachian Mountains near Alderson, West Virginia. I didn’t used to think of myself as someone who would end up there.

I’ve loved living by myself. I’m a natural loner, valuing quiet, privacy, doing exactly what I want, when I want. Oddly, over previous years I’d been looking at other ways of living. (In my FMS formation something was said about the “sneaky” voice of God. Indeed!) A live-in boyfriend – too complicated. Roommates? Nope. I wasn’t clear on what the what I was thinking of was, but now it has come into focus as intentional living.

In 2017 I met a passel of joyous college kids at a West Virginia MLK Day parade who were staying at Bethlehem. I wanted to check it out. Maybe I wanted to be one of the caretakers who lived and volunteered there on a long-term basis? I signed up for the 2018 President’s Day Weekend. My buddy Laura decided to come along. Yay!

As we headed toward the farm door a couple of caretakers came rushing out, said “Welcome home!”, gave us big hugs, and grabbed our luggage. It was so…sincere. For most of my life I’d been working to be cool. Sincere ran counter to that aesthetic. But…I liked my hugs!

Aesthetics have been important to me. I am an art historian, was an arts presenter, journalist, and curator. I love beautiful spaces. As I entered Bethlehem Farms I had the knee jerk thought “Yikes. Who is their decorator?”  The unmatched couches, rawly built interior balcony, hand-painted signs on the kitchen cabinets – “Bowls”, “Towels”, teachey environmental signs in the bathrooms – “Do you know what Phantom Energy is?” (No but right now I just want to brush my teeth.) Where were their priorities? Was I supposed to be here? Really?

Yup. Really. I was so supposed to be there I came back again this year with Laura and two of my dearest friends on earth.

I liked the people. I liked their priorities. Eric and Colleen, the husband/-wife ringleaders, and co-founders, are smart visionaries, wholly committed to social change. They run a house that is about as green as a home can get. Their years of channeling the labor of volunteers to help improve neighbours’ homes has had an impact. They are kind. Their caretakers and guests, following their lead, are for the most part open, friendly, smart and interested.

The bunkhouse vibe of the building was created by workers from the Catholic Worker Movement. Eric told me the Workers brought active alcoholics from the streets of DC down to have a real home, and hopefully sober up. Without AA or therapists or doctors. Eric said when his group went to buy the farm the neighbors had some trepidation. Oh no! More Catholics! They had memories of determined drunks driving tractors into the pond whilst tryin g to get to town for a bottle. Wild!

I hiked in the woods. I meditated in the Hermitage, a tiny wood shed on stilts with a one board wide balcony overlooking a chatty little stream. The energy in the small ravine it sits in is powerful. I washed dishes and was grateful for the hand painted signs on the cabinets. I read all about Phantom Energy. I prayed a lot. And I grew to love praying with a group.

And I figured out…no. I didn’t want to be a caretaker at Bethlehem Farm. I was called beyond those mountains. But…I liked these Catholics. And I liked intentional living. There was plenty of room in the rambly house, and woods, and in the spirit of that place for me to both be on my own and come together with interesting people that I had much in common with. That I could learn from.

On the drive home that first year Laura, who is a brilliant manager of many things, including me, said, “You’ve been talking about going overseas with Catholics for ages and you aren’t getting any younger.” That night we jumped on Catholic Volunteer Network’s website, and searched for two-year placements. FMS popped up and I was talking to their intern three days later.

When the virus calms down,  I will follow my fellow missioner Hannah “Coach” Hagarty back to Bethlehem Home. I will scratch backs, and smile, and chat and play our “Count 1-2-3 and Raise Your Arm Up!” game with my buddies. I will think of another child, born in the real Bethlehem, with gratitude. His legacy and grace, interpreted, embraced by that radical visionary St. Francis, has brought me to this place of joy.

Reflection: How has your past led you forward? Where has God shown Himself in all of this?