Today’s post is taken from the blog of missioner-in-training, Kitzi Hendricks. Kitzi is nearing the end of her 13-week formation in D.C. and will leave for mission in Bolivia in January. 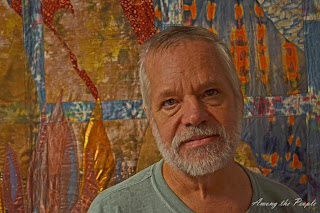 One of Kitzi’s photos of the homeless.

“The concept of sitting and listening isn’t always easy for me. As I have witnessed over the past two weeks, people worry about me when I don’t speak up all the time. There are some days when I will talk a lot. I can be loud, sarcastic, energetic, and engaging in conversations. However, I truly value my days of introspection, and my desire for these solitary conversations can appear at any moment. A word, a phrase, a song, or a sight can flip the switch at any time–morning or night, by myself, with a companion, or among a large group of people, walking or driving, during times of joy or suffering.

I had a beautiful reminder of this when my fellow missioner-in-training Michael and I finally had the opportunity to return to our service site at the homeless medical shelter for men. It had been more than three weeks since we had been able to engage in our service. I can’t even begin to describe how much I had missed the men and truly looked forward to stepping through the front door once again. I was energetic, but a little apprehensive as I walked up the path to the door.

It was a beautiful fall day and although there were many men standing outside soaking up the sun, I didn’t recognize any of them and they didn’t recognize me. There had been a major turnover while we were in collaborative formation and we found ourselves standing in the midst of many new faces and an absence of ones that we had considered our friends.
As Michael and I walked up the stairs to the main floor, we agreed that it would be best to introduce ourselves to the many new residents and to try and gauge the interests of the new men.

Within half an hour of arriving at the shelter, I was, once again, in awe at the power of presence and authenticity. I don’t know why I even have thoughts of doubt in the first place because I am just so blessed to be among these men. As soon as we sat down, I wanted to do nothing but sit and listen to the voices of the people who are so frequently written-off and stereotyped. What power. What inspiration.

Meet J.B: Michael and I had briefly met J.B. before our three week sabbatical, but neither of us had a chance to really converse with him for much more than a few minutes. Yesterday, however, J.B. opened up to us about his experiences in the military and how his personal experiences influence his life today and his views on the government.

J.B. joined the military right out of high school. As a 17 year old, he was bright, dedicated, and athletic–all of which were highly recognized by his leaders and commanders. Within three months of joining the green berets, he was at the top of his class and given the responsibility of platoon leader, moved up to the leader of five different platoons, and then ask to become a member of an A-team. He went to occupation school to learn not just one skill, but all of the skills offered at the school…as required of him by his commanders.

As the conversation continued, J.B. began talking to us about his training at Ft. Benning and his memories of learning war tactics and torture techniques. For all of you who know about and/or protest the School of the Americas, you can only imagine how incredibly interesting it was to hear about these experiences from an insider’s perspective. And then he went on to talk to us about his missions in Central and South America to teach local rebels how to begin revolutionary coups to overthrow their governments without leaving any US trace behind. He was spot on with everything both Michael and I had learned about the involvement of the US in Latin America.

These paragraphs do not do justice to the stories that J.B. told and the authenticity of his personality.

Meet Wayne: Wayne has entered into the shelter within the past week, so he was one of many new faces that Michael and I passed by that morning. From an outsider’s perspective, Wayne is a burly man who can easily be seen as intimidating. However, Wayne has a heart full of compassion and transformation. Michael and I had the opportunity to sit in on a poetry session with a few of the men and Wayne was an engaged participant. His insights into the themes of the poems through the sharing of his own personal stories were so incredibly powerful. He is soft-spoken and looks into your eyes as he shares some of the most personal transformations in his life–experiences from prison, his love for his two daughters. He is the essence of humility and such a great testimony in learning how to be slow to anger.

My stereotypes are continually being challenged and broken down in every conversation that I have with the men in the community. I look forward to seeing them each week. I make sure Calvin smiles before the day is over and that we at least have a few minutes to sit down and chat one-on-one about our days, and that Steve and Hosea share some of their knowledge and wisdom with us about the world.

Most of the time, I sit, listen, and smile. That’s it.

The shelter is always bustling, but when I sit down with the guys, the only thing I want to do is listen. And I don’t want to leave or move or get up. That’s what silence is about…being able to get rid of the other distractions and simply listen. Listen to the wind. Listen to the beauty in a voice. Listen to your thoughts. Listen to God. Just Listen.”

To read more about Kitzi’s formation process and to follow her future mission in Bolivia, visit her blog.