At the end of August, our missioners-in-training all arrived at the Casa San Salvador mission house in Washington, DC to begin formation training with Franciscan Mission Service. During the next three months, they would attend classes on scripture, Franciscan spirituality, and cultural sensitivity together. Through all of this, in the classroom and out, a group of acquaintances would become an eclectic family that supports and challenges each other to grow.

On the afternoon of November 15, Allison Dethlefs, Aubrey Kimble, Erin McHugh, Janice Smullen, and Catherine Sullivan walked into the chapel at the Franciscan Monastery of the Holy Land to officially be commissioned as missioners with Franciscan Mission Service.

The Mass began with a welcome from executive director Kim Smolik. She thanked the congregation for their attendance and their ongoing support of the missioners. Appropriately, the opening hymn was “The Summons,” cantored by Katelyn Hannel, a friend of communications associate Maria Beben.

Fr. Paul Dressler, OFM, celebrated the Mass. Fr. Paul has had a relationship with Franciscan Mission Service for many years and has been the celebrant at commissioning Masses in the past. After the Homily, Programs Manager Emily Norton invited the missioners to face the congregation to read their individual mission statements. The sight of the five of them standing on the altar, courageously verbalizing these statements, was a powerful testament to their faith and their resolve to keep offering that “yes” to God’s call to mission in their lives. It was as though these mission statements that they clutched in front of the congregation were now part of them, that as they spoke the words on the page, they internalized them and gained strength from them as the words left the paper, came alive, and were proclaimed throughout the chapel.

For many, the reading of the mission statements was the most powerful part of the Mass. “I could truly feel the Holy Spirit speaking through the missioners,” said DC Service Corps member Elizabeth Balboa. “I’ve never felt so inspired to follow my own call.”

“I was struck by how each person in her own way wanted to deliver her whole heart and offer everything she could find within herself,” noted missioner Catherine Sullivan’s dad, Larry Sullivan.

“Through these statements, I learned what was important to each of them and gave them the drive to go out and do their work,” said Philip McHugh, Erin McHugh’s brother.

“I was very impressed with how deep everyone’s faith is, especially at a young age,” said Beth Drake, a friend of Janice Smullen. In their words and in the example of their strength, there was also a call to action. “Each missioner spoke not only from her heart but to each of our hearts – although most of us in attendance are not leaving to serve abroad, we could unite with the 31st class of missioners through our shared baptismal call to mission,” said programs manager Emily Norton.

After the mission statements were read, Emily then bestowed each newly-commissioned missioner with a Tau cross with the words, “Receive this Tau cross as a symbol of God’s call for you to bring justice, peace, and love to the world.” The Tau crosses, symbols of Franciscan spirituality, were all brought over from Assisi, Italy, and blessed. 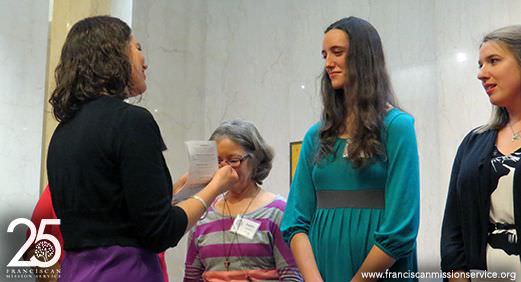 Since this is Emily’s first Commissioning Mass, the occasion was especially powerful for her. As the programs manager, Emily has walked with the 31st class of missioners every step of the way, long before their arrival in Washington, DC.

“I have had the honor and privilege of being able to accompany these wonderful women on three months of spiritual and personal growth during Formation. Commissioning Mass was a beautiful experience for me – it was a way to celebrate how far each missioner has come and how ready they all are to follow God’s call,” said Emily. “The Franciscan joy gracing the chapel during Commissioning was so life-giving that multiple times I caught myself with the biggest smile on my face, in thanksgiving to God. It is going to be sad for me to no longer be able to see them on a daily basis once they leave, but I am so excited to see how they will allow God to work through them and touch the lives of so many during their time on mission!” United together, praying the Our Father The Mass was followed by a reception at the Casa San Salvador mission house. Though the newly-commissioned missioners’ formation in DC is drawing to a close, the adventure of their lives on mission is only just beginning.

*Please Note: FMS is very grateful for Beth Brown’s participation in our Formation program these last three months with her fellow classmates. Although her service term was deferred due to unforeseen circumstances, we are looking forward to commissioning her in the future.