Skip to content
Home / Stories / Creating a Space for God

Creating a Space for God Editor’s Note: Missioner Patrick Montine reflects on the camps in Jamaica that he helped out with this summer and how the camps created a space for children to learn more about God and invite Him into their lives.

This summer, I was able to help out at a couple of summer camps. The first one I helped at was with the kids in Grange Hill, Jamaica, at Saint Mark’s church. I worked with one of the sisters to teach the kids about temptation and respect for others and themselves.

I helped teach the six to eight year olds, which was tricky because I had  no idea how to teach that age group.

Instead of leading the teaching, I assisted Sister. We taught using the Bible passage from Matthew Chapter 4, the passage where Jesus is tempted by the devil after fasting in the desert for 40 days and nights.

At this camp in Grange Hill there were  about 35 kids total. It was a very loud, crazy, and  tough camp, but we hope the kids  learned a lot.

In contrast, I helped with a different summer camp here at Saint Joseph’s in Savanna la Mar. We had about eight  kids at this camp,  so it was a lot smaller and not as wild. The theme for the camp was how God cares for us. 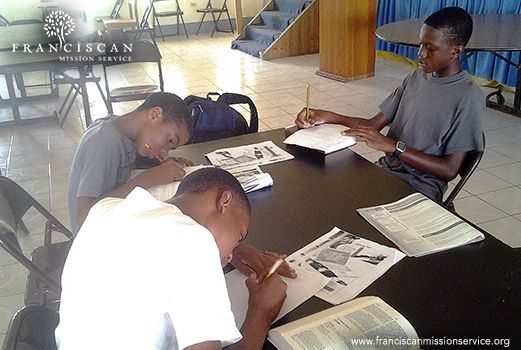 Some of the kids from the camp

We read Bible stories about Jesus raising Lazarus from the dead, Jesus healing the blind man, Jesus appearing to the disciples for the first time, God protecting Shadrach, Meshach and Abednego from the furnace, and Paul and Silas escaping from jail.

In all of these stories, God protected  and cared for his people. At this camp I worked with the older kids. For me, they were easier to work with. We played games and had a great time.

These two camps that I worked at were vastly different in terms of what we did and how many kids we helped but in the end, we accomplished the same two things. One was to create a space for kids to talk about and learn about their faith. The second was that the camps also showed the children how much God loves us, that God is active in their lives, and that he wants to help them. More kids from the camp

I encourage you to take some time out of your day and sit in a quiet place and sit and listen, really listen with an open mind and an open heart to what God is saying in your life and listen for what he wants you to do.

Reflection Questions: Do you set aside time in your day to create a space for God to work? Do you have a quiet space where you can go to spend time with God?