Skip to content
Home / Stories / Telling Their Own Story

Telling Their Own Story 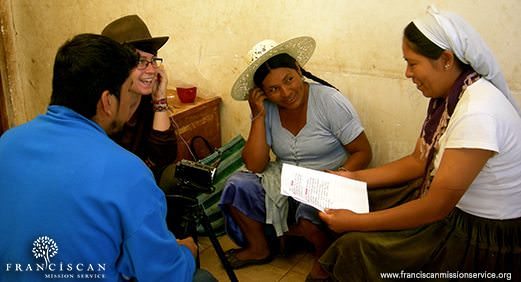 Editor’s Note: Missioner Annemarie Barrett reflects on the experience of accompanying women in the Santa Rosa community as they tell their stories through a sequence of videos produced entirely by the women themselves.

For the past year our garden project has been involved in the process of making videos participativos or participatory videos with the women in Santa Rosa.

A participatory video does the challenging work of deconstructing old and tired paradigms about the nature of service and aid projects and the media made to promote them.

Under the old paradigm, our project team would typically make a video about the service work we do from the perspective of our institution.

But in a participatory video, the women from Santa Rosa are empowered to make their own video depicting their own reality. Choosing photos to include in their video in Santa Rosa

Historically, and unfortunately, institutions that make videos about their service work rarely include people from the marginalized communities in the production of the video. The people in the local community are too often treated as objects passively receiving aid.

Reflecting on those old and tired paradigms reminds me of the old and tired interpretation of mission work, too common still today, which we discussed and critiqued actively in our formation with Franciscan Mission Service.

Historically, mission work has too often failed to treat people in the local communities where they live and work with the dignity, respect, and mutuality that they deserve.

These old paradigms are not just disappointing but also extremely harmful, which is why FMS takes transforming them so seriously and seeks today to form relationships built on mutual trust.

And so it has been a fulfilling opportunity to support the creation of these participatory videos with the women in Santa Rosa, a process deeply rooted in our Franciscan charism.

From the beginning of the process, our team clearly communicated that this video was meant to be for the women and made by the women in Santa Rosa. We would accompany them in the process but they would be the protagonists, they would write the script, do the filming, narration, and selection of music and images. They would also direct the editing process. We started by asking what topic they wanted to address in their first video.

They wanted to talk about the production in their gardens, a significant part of their daily lives.

We then facilitated a script writing process where the women identified the conflicts and challenges they experience related to their production as well as the successes that motivate them to continue.

Annemarie collaborating with the written part of creating a script

Eventually, the day came to film. The women had practiced using the camera and spent the morning taking pictures and filming interviews with one another according to their script. Practicing filming at a workshop on videos participativos

After an editing process in which the women made any changes necessary to make the video more true to their experience, the end result was about a 6-minute video that we have now shown multiple times in local workshops, community and parish meetings. Editing the first video with the help of a local producer

The first video we made was such a success that we were asked to make two more videos, which we are already editing.

The women decided to make the first about their struggles with water access in their community and the second about more success stories related to their localized food production.

Having accompanied the production of these videos in every step of the process, I am now moved to tears when seeing the final product.

The women in Santa Rosa may not have learned to read or write, but for too long those of us with the privilege of formalized education have believed that this means they are not capable of telling their own story. Nothing could be farther from the truth.

With the right tools and support, the powerful testimonies and hopeful experiences of these women prove wrong all of those people in their lives who have thought less of them.

If we have the courage to listen, really listen, to the life experiences of those who do not experience the same privileges that we have been afforded, we are invited to step outside of our limited worldview and prejudices and learn from the wisdom in their journey.

Reflection Questions: Who tells the stories you listen to in the media? What can you do today to listen to the experiences of people who you believe to be different than you? How can you draw closer to those living on the margins so as to hear their perspective, their stories, their wisdom?