Skip to content
Home / Stories / Dancing Through the Doorway

Dancing Through the Doorway 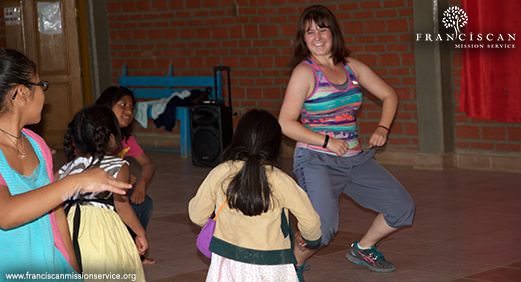 Editor’s Note: Missioner Allison Dethlefs shares how she’s been able to start forming relationships through teaching Zumba classes to girls who are survivors of sexual abuse.

Upon arriving in Cochabamba, Bolivia, over seven months ago, I had no idea what kind of ministry I was going to get involved in. By a stroke of luck, during my six weeks of language school I was introduced to Nuestra Casa (Our House), a home for girls ages 7-18 who have experienced some kind of sexual violence or abuse, often in their own homes.

It is a place for them to recover away from their situation by providing them with security, access to school and technical training, activities, responsibilities, counseling, and whatever they might need in preparation to become independent or transition back into their homes or families.

Upon my arrival, I was asked if I might be able to help lead any activities for the girls to stimulate their creativity and help them to express themselves and discover their talents. I offered to teach Zumba classes once or twice a week, and since then, I have been dancing with the girls two nights a week, every week without fail.

At first these classes were somewhat frustrating. Some girls would start by enthusiastically participating and then lose interest halfway through. Others would simply stand or sit nearby and watch.

Perhaps my biggest frustration was my desire to really get to know these girls and strike up a deeper relationship, something that I struggled to do since my only real interactions with them were dancing and then the fifteen minutes or so before and after class. Allison laughing with some of the girls from Nuestra Casa

It wasn’t until more recently that I’ve begun to see that dancing every week is merely a doorway to those relationships.

The relationships I initially imagined may not have blossomed the way I hoped they would, but the little steps in that direction that we have achieved trump my empty expectations.

Nine-year- old Alejandra quickly became one of the most enthusiastic and talented little dancers I’ve ever seen, something I made sure to praise her about regularly.

After arriving at the Casa and sitting quietly to the side through my first couple of lessons, Susana slowly began to participate, and I watched as she let her guard down and became the goofy, joyful girl that she had hidden behind her walls. Allison dancing with some of the girls from Nuestra Casa

Carmen, one of the oldest girls, gradually began confiding in me about her struggles at the Casa and her fears about her coming transition out of the Casa after she turned 18. And only last week, Milagros, who rarely talks to me, came to let me in the front gate and, in typical teenage girl fashion, proceeded to tell me all about her boy problems.

Reflection Question: Do you have a doorway into forming relationships with others?