Skip to content
Home / Stories / Be Not Afraid: Leaving ‘Me’ Behind

Be Not Afraid: Leaving ‘Me’ Behind 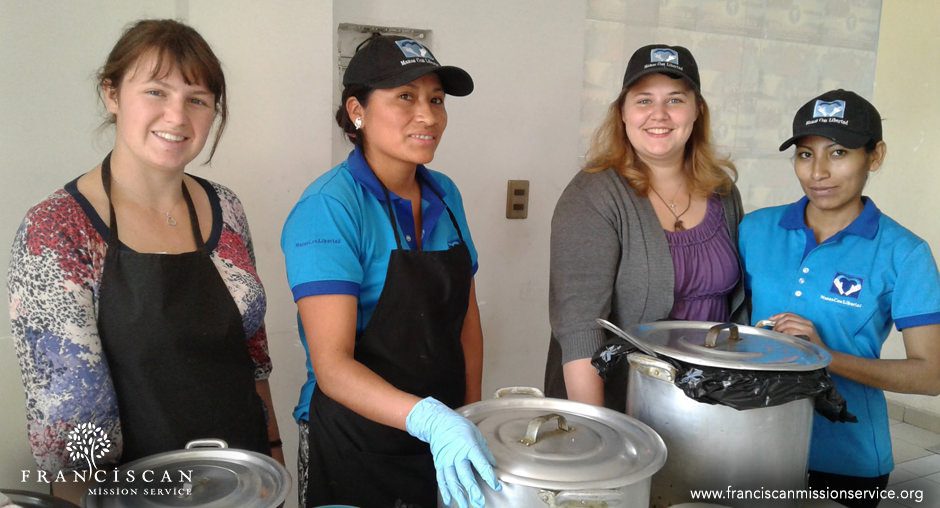 Editor’s Note: Missioner Catherine Sullivan shares that when she first arrived in Bolivia, she was her own greatest obstacle and had to overcome the expectations she placed on herself.

For this year’s Advent blog series, we  were asked to write about overcoming fear.  We hear the words “Be not afraid” so often in the Bible, words that are  often accompanied by something we expect to be beautiful – angels, God, etc.

So, I searched for something I had feared upon arrival in Bolivia. I thought of things that would scare many people about mission: having my purse slashed while being mugged, being followed by a drunk man on my lone walk to work, and working in prisons in the most impoverished  country in South America. But those brief and undeveloped descriptions do very little to describe the reality of my life here – and once understood, they are far from frightening.

What did frighten me, however, was me. I think there is a real fear that can come from measuring one’s own potential,in understanding that every moment, every action or non-action is a decision to be made. It is a decision to be the best version of yourself or something inferior. This realization is a discovery that can (through faith and humility) be liberating and full of endless possibilities, or can (through fear and pride) be terrifyingly debilitating.

For much of the beginning of my time on mission, I was battling myself. I remember one day, peeling carrots for hours in the kitchen at Manos, I did not say a single word to the women with whom I was working. In my head, as I slowly peeled one carrot after another, I told myself that each second was a missed opportunity- to learn Spanish, to show interest in the lives of these women, to share my own story and begin forming bonds. I planned sentences in my head, and then convinced myself that they were not good enough, or that too much time had passed to begin speaking now. And after five hours, I left without having said a word.

I was not what I had expected myself to be. Even though I had tried to enter mission without expectations, they were there- it is human nature. Consequently, the beginning of mission was a constant cycle of letting myself down. Each time I turned down an invitation to an event, each time I was too nervous to ask a question, each time I missed home, I thought I was failing. And the possibility that I was not being the best that I could be was crippling.

However, time is an amazing thing- it offers constant opportunity for growth. I began to see that all  of my worries, all of my fears, were wrapped up in one thing: ‘me’.  At the start of my time in Cochabamba, I saw the opportunities of every moment as something to fear, because I was afraid I would fall short.

But with time, one carrot-peeling afternoon after another, I began to hear that voice in my head- “be not afraid”- and something that at first seemed so frightening, and so beyond me, became a beautiful reminder of God. That with Him at my helm, I cannot fall short. And with this freedom, came the liberty to leave ‘me’ behind, and instead focus on the incredible people and opportunities in front of me.

Reflection Questions: Can you relate to Catherine’s struggle with her own thoughts and unrealistic expectations? How do you center yourself in God in these times of self-doubt?