Skip to content
Home / Stories / Blessed are the Peacemakers

Blessed are the Peacemakers Editor’s Note: DC Service Corps volunteer Christopher Zaragoza shares a reflection on being peacemakers amid the war in Ukraine.

These past days we have all witnessed the tragedy that unfortunately has unfolded in Eastern Europe. Our hearts break for our Ukrainian brothers and sisters who are experiencing hardship. Families have been separated, innocent civilians have died, and many find themselves in fallout shelters. The images we see in the different news outlets are unequivocally heart-wrenching. Many of us would like to help our brothers and sisters who are in desperate need.

In Casa San Salvador, we have done a couple of things to show our support and solidarity to the Ukrainian Community. The first act we did as a community was a Holy Hour in front of th

e Blessed Sacrament to pray for peace in Ukraine. On February 27, 2022, we participated in the Divine Liturgy at the nearby Ukrainian Catholic Shrine. In the afternoon of that same day, some of us participated in a peaceful demonstration in front of the White House to ask the US government to help Ukraine. As a community, we want to take a stand and speak out against war.

St. Francis of Assisi, who is the patron saint of Franciscan Mission Service, is a role model to follow. He was a peacemaker for he understood that the Christian God is a God of peace and unity rather than division. Francis emphasized the importance of dialogue. During his lifetime, a war broke out between Muslims and Christians in the Holy Land. Francis traveled to the Holy Land and personally met with Sultan al-Malik al-Kamil. Despite their differences, Francis knew they had things in common, one of them being their shared humanity.

As Christians, we have an obligation to follow the example of Jesus who never created war, but rather a fraternity of love. He asked that we pray for our enemies and those that persecute us. Jesus said, “Blessed are the peacemakers, for they will be called children of God.” For this reason, many Christian leaders have spoken against the current war in Ukraine. They have urged us to fast and pray for peace.

Let us join hands with one another, especially with our enemies, and say NO WAR in all its forms. Let us follow the example of Jesus and St. Francis of Assisi in being peacemakers in the midst of conflict. 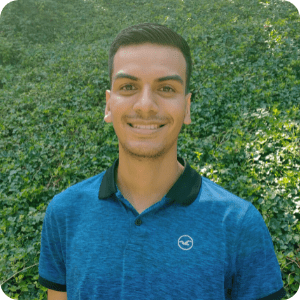 Chris graduated from Loras College in December of 2020, having earned a Bachelor of Arts degree in Psychology and a minor in Religious Studies. He is doing a year of service with the Franciscan Mission Service and is serving at the Father McKenna Center. He is excited about this new chapter in his life and is ready to encounter God through the people he will serve in this year of service. After this experience, he is planning to attend graduate school for a Master’s Degree in Social Work.