As a child, I hated asking for help. As the youngest of five, I refused to believe that my siblings knew anything that I didn’t. My response to any new information was a stubborn “I know.” (I didn’t know).

Over time, I have learned that I do not know everything — as a matter of fact, I know very little. This fact has been quite freeing. I have become increasingly aware, aided by formation with Franciscan Mission Service, that a storage of knowledge, a number of books read, a number of tasks accomplished, and a number of schools graduated from does not determine how prepared someone is to serve and live with those in poverty.

We are sent to be vessels through which God can work. Alone, I know little; through God, I can do whatever is needed. What a blessing and a freedom!

Despite having reached this conclusion, I have been continually humbled and taught by those whom I am serving here in DC. As part of our three-month formation as missioners-in-training, we are given the opportunity to volunteer at a local organization.

I am blessed to be serving at Street Sense– an organization that prints a bi-weekly newspaper featuring articles written by those experiencing homelessness. 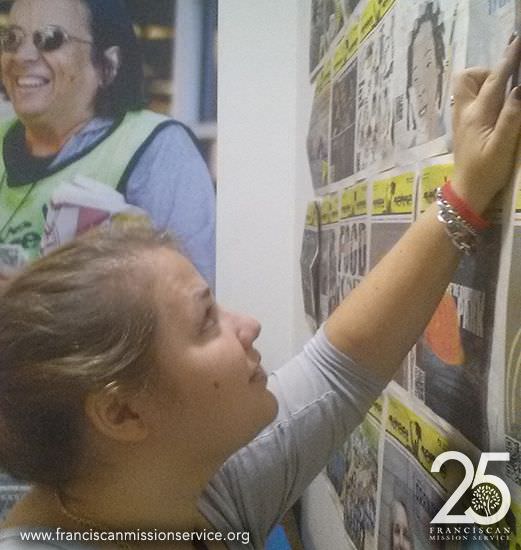 Last week at Street Sense I met a man named Viktor. He is a Russian man in his late 70s who is desperately trying to return to Russia and his sons. Due to the fact that my Russian is non-existent and his English is a bit shaky, we had some trouble communicating. However, in this brief encounter, Viktor taught me a lot.

A woman brought Viktor to the office that day after she found him wandering around a square a few miles away, stumbling and bumping into things. He didn’t know where he was, so he asked her for help.

Viktor’s speech was jumbled and his eyes were red. He informed me that he had not been able to see for the last few days due to his need for prescription eye drops. He didn’t know how to get them so he asked me for help in obtaining them.

He had not been back to his shelter for days because he didn’t know how to find the bus that took him there. He asked me to help him get there.

This man, who has seen so much more of life than I have – who has worked, who has been exiled, who has lost his wife, who is trying to return home – consistently humbles himself and turns to others for help.

Viktor humbled himself before me, admitting that he did not know, and that he needed help. And I, in return, had to admit to him that I did not know how best to help him. It was in those silent confessions, in our mutual humility, that we found each other.

Viktor reiterated and instilled in me the strength of humility; the importance of the three little words “I don’t know.” These words connect us to Christ, who humbled himself to death on the cross.

These words open doors to other people, by allowing them to teach, to do, and to be with us. These words have the power to build bridges and to break down barriers. So God, so world: I don’t know. Teach me!