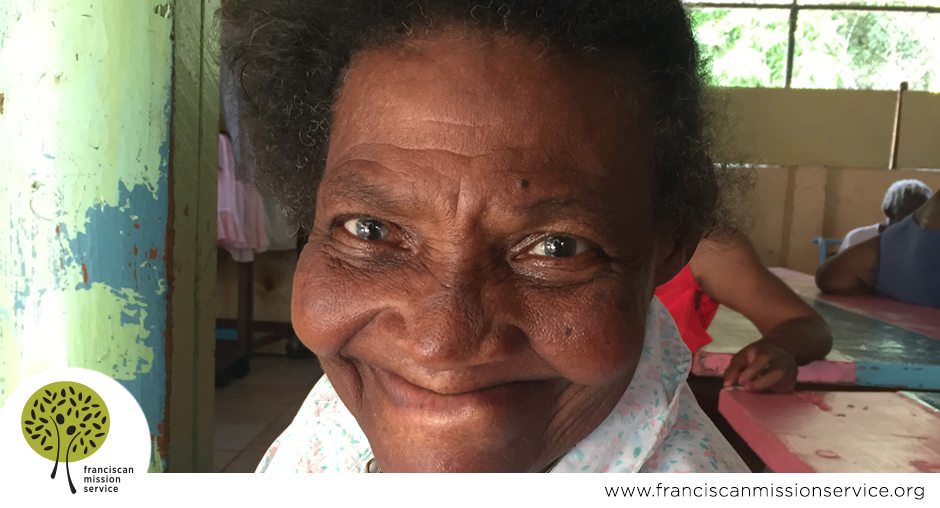 Editor’s note: Missioner Cindy Mizes shares about a day at Jacob’s Well with the residents there, and how one personal experience in particular gave her a lens to understand the societal issues that Jamaica is facing today.

She was sitting alone quietly in a wheelchair that had been pushed into a dreary corner of the outdoor pavilion at “Jacob’s Well,” a home run by Brothers of Missionaries of the Poor in one of the slum areas in Kingston. The home shelters women suffering from serious physical disabilities and severe psychiatric and mental illnesses. She looked about 25 years old, but she appeared to me as a frightened little child.

Her face was like that of an angel, unblemished and silky  smooth. It was mid-day feeding time, and I began to ever-so-carefully feed her a rice and meat mixture from a tin bowl. Her beautiful black almond-shaped eyes began to aimlessly traverse her surroundings, but she would not look directly at me.

As I was feeding her, I began to be drawn into her mysterious world. There were no words spoken between us and her eyes never met mine, but I was mesmerized by the soulful energy emanating from her, and I suddenly felt an inexplicable bond. I contemplated her untold story and wondered if she felt alone or scared, abandoned or neglected. I wondered if she ever heard the words, “I love you” or felt the warmth of a loving embrace or a kiss on the cheek. The despair I began to feel was overwhelming. After feeding her, I stepped away. I asked one of the brothers for her name, but he didn’t know it. I wanted to be able to refer to her by name, to give her the respect she deserved by recognizing her unique identity. Several names ran through my head but one stuck: Crystal. Behind those dark eyes and hidden despair, this woman sparkled like a Crystal.

In Jamaica, over 40 percent of the population have some sort of mental illness. According to a 2015 article, mental health services in Jamaica are severely under-resourced and unable to cope with the needs that people with mental illness require. Along with the stigma tied to mental illness and the lack of family support, these individuals are often abandoned and left on the streets or in homeless shelters. Crystal is just one of the thousands of Jamaicans who suffer from mental illness and rely on the mercy and care of others for their survival. After frolicking with some of the other residents, the Holy Spirit prompted me to return to Crystal and take her out of her dark corner. I pushed her wheelchair along the concrete paths lining the home and out into the courtyard. Then something happened that I never expected: Crystal smiled. For a moment, she left that small corner of her dark world and breathed fresh air into her lungs and felt the warmth of sunshine on her skin. Her sudden joy and radiating smile were  contagious, and tears welled up in my eyes. I could sense Crystal’s spirit dancing, and I knew she had been touched by God’s grace. As I was preparing to leave, another resident came out of nowhere and gave me a huge bear hug. As she was hugging me, she kept repeating a prayer over me which I clearly recognized:

“May God Bless you and keep you. May He keep you safe from harm. May he have mercy on you and your family. May the Lord always be by your side. May He protect you and uphold your undertakings. May the Lord bless you always.”

On that particular day at Jacob’s Well, I—like the Samaritan woman—was offered a drink from the wellspring of everlasting life and love through the people whom I was there to serve. God’s Spirit was living and breathing in Crystal and the other residents whom society and political systems rejected and abandoned but who, unselfishly, revealed to me their despair and destiny and showed me what true and faithful love is. They speak a language that only those who know and have experienced Christ’s suffering can understand. As a servant of God, I am undeserving of such love from such beautiful children of God. But through them, I was able to enter into Christ’s broken body, share their suffering and their joy, and see through their eyes. This transformative experience is an indelible part of my heart which will always be with me.

“Come walk with me; come share my life,
You must know the shadows if you would know the light.
No eyes have I, no ears to hear.
You must be my Body and show my Father’s care.
Open your eyes, see what I see.
For this world how I suffer. Share my destiny.”

From “To Be the Body”

Reflection Question: Take some time today to let yourself be drawn into another person’s world. Listen to what they have to say or accompany them in silence.