Skip to content
Home / Stories / I’m Going To Live In A Convent, Oh, My Nerves!

I’m Going To Live In A Convent, Oh, My Nerves! 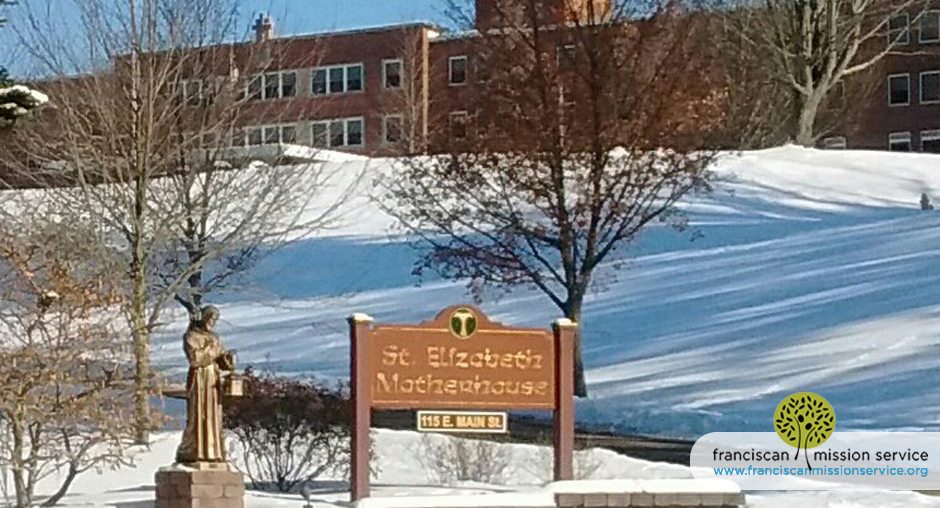 Editor’s note: Missioner Tim Shelgren shares a connection he discovered between FMS and his hometown—a connection he will take all the way to Jamaica.

For thirty-eight years I lived, worked, and raised my children in the Olean/Allegany area in Upstate NY, home of St. Bonaventure University. Across the street from Bona’s is a big building, sitting on top of a hill, called St. Elizabeth Motherhouse. Over the years I drove by the Motherhouse hundreds of times, and I often wondered, ‘Who lives in that building?’ Last month my question was answered. The Franciscan Sisters of Allegany live there, and I am going to join them—in Kingston, Jamaica!

I did not know when I applied to FMS one year ago that they work in conjunction with the ladies on top of the hill in my hometown. Nor did I realize that those ladies had ministries in Jamaica, Brazil, and Bolivia. When I began recognizing these connections, I felt a sense of spiritual comfort in the ironies.

After Formation with FMS in DC, I had time back at home in Allegany (while waiting for my Jamaican visa applications to process) to make attempts at getting to know the Sisters of Allegany. Please know, one of my original attractions to FMS was the idea of fraternity. As an adult student at St. Bonaventure fifteen years earlier, I very much enjoyed getting to know the friars there as teachers and friends. When FMS told me in November that I would be living and serving with nuns, I felt a sort of anticipatory culture-shock. Half joking, I started nervously using the sentence, “I’m going to live in a convent.” I needed to hear the words out loud, and get used to believing them.

Over the Christmas holiday, I did a little networking. I ran into Sr. Paula from St. Bonaventure, who I had met when she did a session for us during FMS Formation. I learned in session that Sr. Paula teaches physical education to the women at the college. This news was the first that brought my awareness to the connections between FMS and my home town.

Sr. Paula then connected me with Sr. Odette at the Motherhouse, and soon I received an invitation to lunch there. Wow! Sr. Odette, a Jamaican woman, could not have been any nicer! Full of joy, she greeted me at the front door, told me exactly what she had planned for my visit, and escorted me to the eating area where about thirty ladies were gathered. At my table were several who had served in Jamaica. They told me stories, and assured me that the sisters in Jamaica will be a joy to live with. I responded, “If they are as welcoming as you, I will be thrilled.”

Since that day I have gotten to know one of the sisters, Sr. Barbara, quite well. I had the privilege of volunteering with her at St. Bonaventure’s Warming House several times while the students were away on holiday. Conversation with Sr. Barbara indicated to me that her giving is never going to end.

I commend Sr. Barbara for her fifty-five years of service as a Catholic nun. Her story is fascinating. She felt her first call when she was a little girl. At Mass with her mother one day, she walked down the aisle and looked up to see a statue of Christ “behind bars.” In her young mind she said, “I wish I could help him.”

To do so, she later went to the Villa Maria Academy in Buffalo, NY, committed her life to the Church, and served as an elementary school teacher in Catholic schools. Then, after earning her Masters in Religious Studies at Aquinas College, she became a director of religious education for adults. Much of this service Sr. Barbara did as a Franciscan Sister of Allegany.

Today, still in Allegany at the Motherhouse, she continues to stand the test of time. She will interrupt her work as a sacristan this summer only to travel to Bolivia to join in service with the Franciscan sisters there for a few months. When she returns, her hope is to work toward a home care certificate, and begin “taking care of marginalized home-bound people within a ten-mile radius.”

I asked sister when she will retire, and she said, “Whenever Reverend Mother tells me to.” Personally, I suspect that day will never come. I happened to see the Reverend Mother, nowadays called the General Minister, moving happily from project to project on my visits to the Motherhouse. Retiring…that concept doesn’t seem to be on anyone’s mind.

Every weekday morning during my time at home, I visited the Motherhouse’s stunning marble-faced, bronze-furnished chapel for Mass. Through that experience, I had the privilege of meeting and talking with Sr. Ann, a different kind of nun.

Sr. Ann has also stood the test of time—fifty-four years as a sister. As a high school student, she attended St. Elizabeth Academy. She was in the last graduating class there in 1960. As a young woman she answered God’s invitation to “pray with the cloistered nuns” who were at the Motherhouse from 1959 to 1967. Today she lives and serves as a long-time member of the Ritiro. Ritiro is Italian for “retreat.”

In the Ritiro are five sisters who live in community with one another as contemplatives. Like cloistered nuns, they spend their time together in prayer, sharing faith, going to liturgy, and having meals. Their service to one another, to all the sisters in the Motherhouse community, and to visitors on retreat is to “let God love through us.”

Unlike the original cloistered nuns, the Ritiro sisters are not confined. With awareness of where and to whom they are called to serve, they go out into the larger community. Sr. Anne, with her training at Our Lady of Lourdes in Camden, NJ often serves as a massage therapist.

This story is intriguing. In her youth, sister once touched the hands of a charismatic priest at Mass. In that touch, her hands began to produce heat. She was told that she was given the gift of healing in that touch, and subsequently took a course on Therapeutic Touch in the city of Buffalo. Later she completed her professional licensing requirements in Camden. My interest here stems from the fact that I, too, am a licensed massage therapist.

Moreover, Sr. Ann serves as a spiritual director in the community, and also as the organizer of individual and group retreats that take place in the Ritiro. I asked her when she will retire. An important question to her, she paused to think and said, “Sisters don’t just retire from a vocation and life commitment. Like parents do not stop being parents until they die, nuns continue in ministry until they are on longer able.” Sister Ann holds both a keen sense of identity and a unique set of gifts. These are the attributes that, I believe, make her so beautifully different.

After thirty-eight years, I now know who lives in that big building on top of the hill, at home in Allegany. They have a physical education teacher, a joyful Jamaican hostess, a never ending giver, a Reverend Mother who obviously loves ongoing projects, and a massage therapist living there—and dozens of others who have their arms wide open to a male visitor in a spirit of Franciscan hospitality.

Should I be nervous about living with ladies like that? My conclusion is to the contrary. I cannot wait to go to Jamaica, move into the convent, and try to KEEP UP with the nuns. Sisters of Allegany in Jamaica, I thank you for the invitation. I am ready!

Reflection question: Think about the ways in which you’ve connected with the people in your life. Where do you see God in those connections?