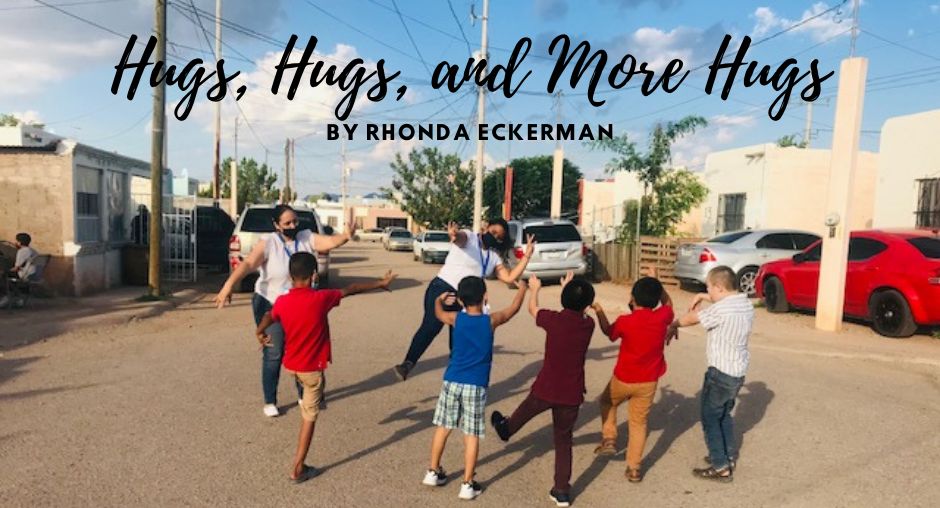 I have now been working across the U.S.-Mexico border for over a year, and one of my favorite customs is greeting a stranger with a hug. I watched in wonder as a nun arrived for her shift at the Agua Prieta Migrant Center and excitedly greeted every single person with a hug. When she was introduced to me, she squealed and gave me a big bear hug. I have to admit that I was rather surprised as I was wrapped up in the arms of a total stranger, but it did not take long to feel loved and comforted. As I became established in my ministries, this practice continued. To me, this is the nicest way to begin an interaction, and I find myself initiating interaction in a similar way, surprising many strangers.

I have been so blessed that one of my ministries involves children. The kids I teach at the community center in Agua Prieta range from six to twelve years of age. At first, the interactions were awkward; I look different with my white hair and have limited Spanish skills. As the children became more comfortable with me, they would ask for or initiate hugs. I have been surprised that many of the students love hugs and will even take a break on the playground to come over and get a hug. But there was one child that I will not soon forget. Andres was extremely shy and sad. It was a struggle at the beginning to teach him a word of English because he would not look at me. After many weeks of high fives, pats on the back, and verbal cheerleading, he took me by surprise one day by initiating a strong joy-filled bear hug that almost knocked me off my feet. And not just one. Throughout the afternoon, I must have gotten at least five spontaneous happy hugs. Andres is one of my favorite students, but please don’t tell the twenty other favorite students I have at the community center.

I am filled with joy when I leave the kids, having gotten a week’s worth of hugs in one day. But, the most heart-wrenching hug I have ever gotten was one at the Agua Prieta Migrant Center. This hug was from a woman who had just arrived after being expelled back into Mexico by U.S. Border Patrol.  She was sobbing. It is not unusual to see guests cry at the center as the reality of their situation and the decisions they have to make, weigh heavy on them. Trying to cross the Arizona desert again or go back home both have elements of danger and the possibility of death. As I was providing a warm drink to her and her companions, I asked her how she was doing and without hesitation, she leaned into me and I welcomed her into my arms. I believe at that moment, for different reasons, we both felt hopeless. There were no words I could offer to comfort her, and she knew her next choice could be her last. I held her as she sobbed. Not but five minutes later, she and her companions left the center.

When I think back, I feel honored to accompany my sister during one of the worst moments in her life and pray that the hug will convey the same love and comfort that I felt when I first arrived.